The Kodaira Hirakushi Denchu Art Museum is tucked into a quiet neighborhood, close to the Tamagawa-Josui canal. The museum is comprised of two buildings, the gallery and Denchu’s former residence. Denchu fell in love with the Tamagawa Josui canal in his 60’s. In the twilight years of his life he commissioned a home to be built near the canal, where he spent the final 10 or so years of his life creating new sculptures until he passed away at the age of 107.

The gallery of the museum features some of Hirakushi Denchu’s most impressive and realistic wooden sculptures. The subject of many of Hirakushi Denchu’s sculptures are historical human figures from Buddhist mythology and Chinese folktales. Denchu’s ability to realistically captures the details of an individual’s face led to many portrait requests throughout his art career.

His most renowned work is his 2-meter tall masterpiece Kagami-jishi, which can be seen at the National Theatre of Japan. A version which is 1/4th the size of the original can be viewed at the Hirakushi Denchu Art Museum.

His career as a sculptor started when he moved to Tokyo at the age of 25. He lived near Choan-ji Temple and studied Buddhism, which became a major influence on his personal life and artwork. A few years later he met the figure who arguably had the most influence on his life, Okakura Tenshin. 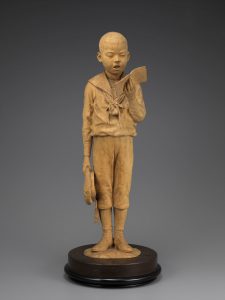 Looking at the first piece he ever won an award for, Singing the National Anthem (Shou-ka Kimigayo), Denchu’s ability to capture the small details of life is striking.

Denchu continued to make sculptures until he decided at the age of 42 that something within his art was lacking. He switched his focus from producing new art to mastering the human figure. The fruits of his three years of studying are unquestionably highlighted in Reincarnation (Tenshou), the first piece Denchu produced after completing his studies.

In the later years of his life, Denchu became a professor at the Tokyo National University of Fine Arts and Music (current day Tokyo University of the Arts). He accomplished this without having been classically trained at a university, instead using the name he built for himself throughout the years.

At the age of 98 he moved to Kodaira, Tokyo, where he lived out the last 10 or so years of his life until the age of 107. Even after he turned 100, Denchu had the desire to keep creating new sculptures. In front of his Japanese-modern home stands a cut of a keyaki log, which Denchu had purchase at the age of 100 with the intent to use it for sculpting. 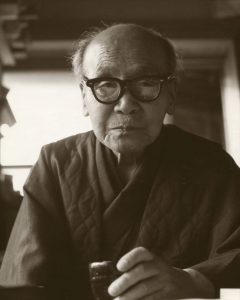 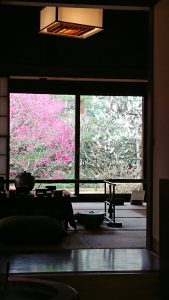 Hirakushi Denchu’s former Japanese-modern home is lovingly taken care of by the museum. The home is still decorated how Denchu left it, giving visitors a clear vision of how he lived his day to day life.

Late February is an ideal time to visit, as Denchu’s beloved plum trees will be in full bloom. The plum trees in his garden were so important to him that he requested the architect to build his home in a way that the main rooms of his house, the room he entertained guests in and his living room, face the plum trees.

Events are held periodically, such as tea ceremonies in the spring and fall, as well as garden concerts. 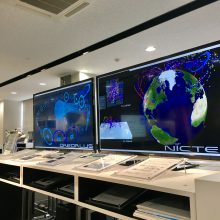 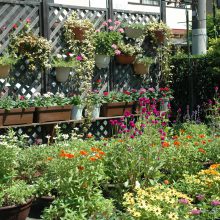 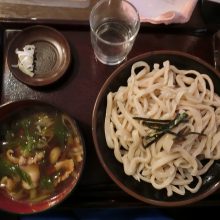